Stratasys Ltd., the 3D printing and additive manufacturing solutions company, today unveiled a 3D printed mask in collaboration with widely-acclaimed designer Neri Oxman and The Mediated Matter Group. Designed and customized for Icelandic singer-songwriter, Björk, as part of a collaboration with Stratasys, the mask was unveiled on-stage in a performance at the Tokyo Miraikan Museum last week, in front of a specially invited audience. Inspired by Björk’s most recent album, ‘Vulnicura’, Oxman and her team used 3D scans of Björk’s face to create digital interpretations of her bone and tissue structure, with the customized design brought to life with Stratasys’ unique full-color, multi-material 3D printing technology.

Björk wore the 3D printed mask during the opening performance of the Tokyo leg of her ‘BJÖRK DIGITAL’ event series, a new virtual reality project from the musician running from June 29 to July 18, 2016. The pioneering event marks a world first, as the first-ever event to be broadcast live via 360-degree virtual reality streaming. With a clear focus on technological innovation, Björk performed the single ‘Quicksand’ from her latest album to a backdrop of high-resolution images of the earth, along with an impressive sequence of light projections mapped onto the 3D printed mask. “I am so incredibly blown away by Neri Oxman’s work and excited to finally work with her,” says Björk. “She is a true pioneer in capturing the biological with 3D printing in such a refined and profound way. It’s been a real joy to get to know her!”

“God hath given you one face, and you make yourself another.”
—William Shakespeare. 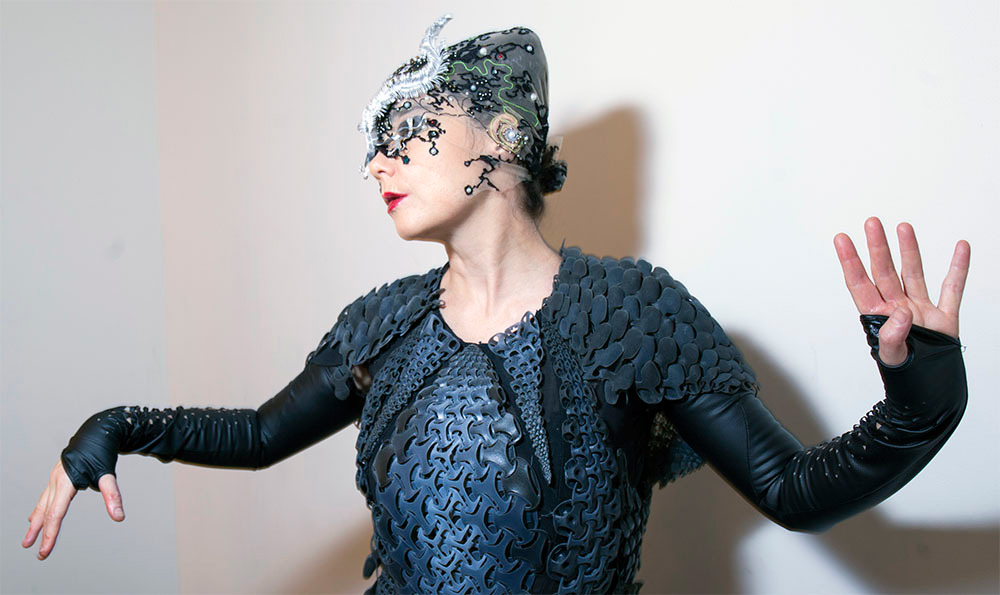 Entitled ‘Rottlace’, a variation of the Icelandic term for ‘skinless’, the 3D printed mask reflects the complex human musculoskeletal system, based on Björk’s own facial structure. Using Stratasys multi-material 3D printing, Oxman and Mediated Matter were able to mimic the elaborate combinations of contrasting materials found in the face, such as the soft tissue, muscle and rigid bone structure – all within a single print. According to Oxman, the unique capabilities of this technology to recreate complex geometries with varied material properties allowed the mask to retain a unique flexibility and freedom of movement that would be integral to Björk’s performance.

“Inspired by their biological counterpart and conceived as ‘muscle textiles’, the mask is a bundled, multi-material structure, providing formal and structural integrity, as well as movement to the face and neck,” explains Oxman. She also believes that such developments in high resolution 3D printing will inspire designers to rethink the design and production of textile goods made with fibres. “Multi-material 3D printing enables the production of elaborate combinations of graded properties, distributed over geometrically complex structures within a single object. With Rottlace, we designed the mask as a synthetic ‘whole without parts’.”

“The Rottlace mask was designed for Björk while we are also working with Neri on a larger mask collection for Stratasys, which will debut later this year under the title ‘The New Ancient’,” says Naomi Kaempfer, Creative Director Art Fashion Design at Stratasys. “It’s an honor to see visionaries such as Björk embrace 3D printing for the expression of her art. This technology not only provides the freedom to produce perfect fitting costumes for the film and music industries, but also the inimitable capacity to materialize a unique fantasy to such a precise level of detail and 3D expression.”

*Rottlace is a cognate of Roðlaus (“skinless” in Icelandic).
*The Nano Enhanced Elastomeric Technology material will become commercially available later in 2016.

For more than 25 years, Stratasys Ltd.  has been a defining force and dominant player in 3D printing and additive manufacturing – shaping the way things are made. Headquartered in Minneapolis, Minnesota and Rehovot, Israel, the company empowers customers across a broad range of vertical markets by enabling new paradigms for design and manufacturing. The company’s solutions provide customers with unmatched design freedom and manufacturing flexibility – reducing time-to-market and lowering development costs, while improving designs and communications. Stratasys subsidiaries include MakerBot and SolidScape, and the Stratasys ecosystem includes 3D printers for prototyping and production; a wide range of 3D printing materials; parts on-demand via Stratasys Direct Manufacturing; strategic consulting and professional services; the GrabCAD platform with over 3 million professional users; and the Thingiverse and GrabCAD communities with over 2 million 3D printable files for free designs. With more than 2,700 employees and 800 granted or pending additive manufacturing patents, Stratasys has received more than 30 technology and leadership awards.

Karl Lagerfeld to Design the Lobbies of the Estates at Acqualina