In many ways the world has never seen a First Lady like Michelle Obama. 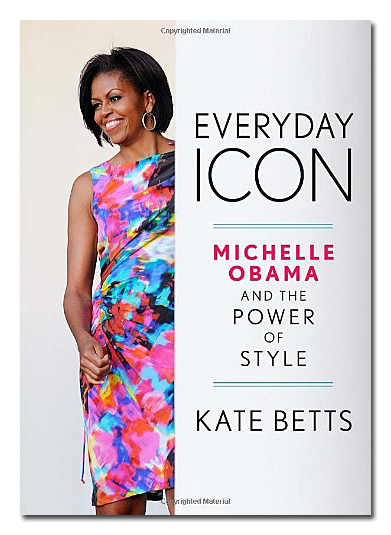 From the precedent of her race to the singularity of her style, she has been the object of immense fascination. What she says, what she does, and not least, what she wears, is scrutinized around the world.

Writing at the crossroads of politics and fashion, Kate Betts explains why Michelle Obama‘s style matters, and how she has helped liberate a generation of women from the false idea that style and substance are mutually exclusive. Following the transformation of Mrs. Obama from her early days on the campaign trail to her first state dinner at the White House, Betts, a longtime fashion journalist and former editor in chief of Harper’s Bazaar, reminds us that while style can be expressed in what you wear, it is inextricably bound up in who you are and what you believe in. In a smart, breezy voice backed by extensive interviews and historical research, Betts shows how Michelle Obama’s bold confidence and self-possession have made her into an icon and transformed the way women see themselves, their roles, and their own style.

With two hundred color photographs, original designer sketches, and historical images, Everyday Icon is not only a lavish tour of our First Lady’s style statements, but also a fascinating behind-the-scenes account of how she created her image and, more important, what that image says about American style today. Much has been written about Michelle Obama, but Kate Betts places her in a broader cultural and historical context; Everyday Icon is the definitive book on how a working mother of two became an unforgettable, global style icon…read more

About the Author
Kate Betts is a contributing editor at TIME magazine where she has written about the worlds of style and design since 2003. Betts is also a columnist at The Daily Beast. Previously, Betts was the editor in chief of Harper’s Bazaar. She moved to Bazaar from Vogue. Betts was recently named one of the top 10 fashion editors by Forbes, and she has appeared on network and cable television regularly since 1993 including shows such as The Charlie Rose Show, The View, and The Today Show. She has done regular reporting for CNN and was the subject of a Lifetime documentary, Putting Baby to Bed: Wife, Mother, and Editor in Chief, about her experience as the youngest editor ever to take over a fashion magazine. A graduate of Princeton University, she resides in New York with her husband and two children.

LE CUIR A PARIS Leather and Fur Trends for Summer 2014