Some believe the rainbow leads to a pot of gold, GRAHAM suggests carbon may be a more exciting destination

Its new Chronofighter Superlight Carbon watches integrate the inspiration of dynamic coloured Formula One tyres. The brand with petrol in its veins and style on the brain presents timepieces that fuse superlight carbon technology with supercharged looks. 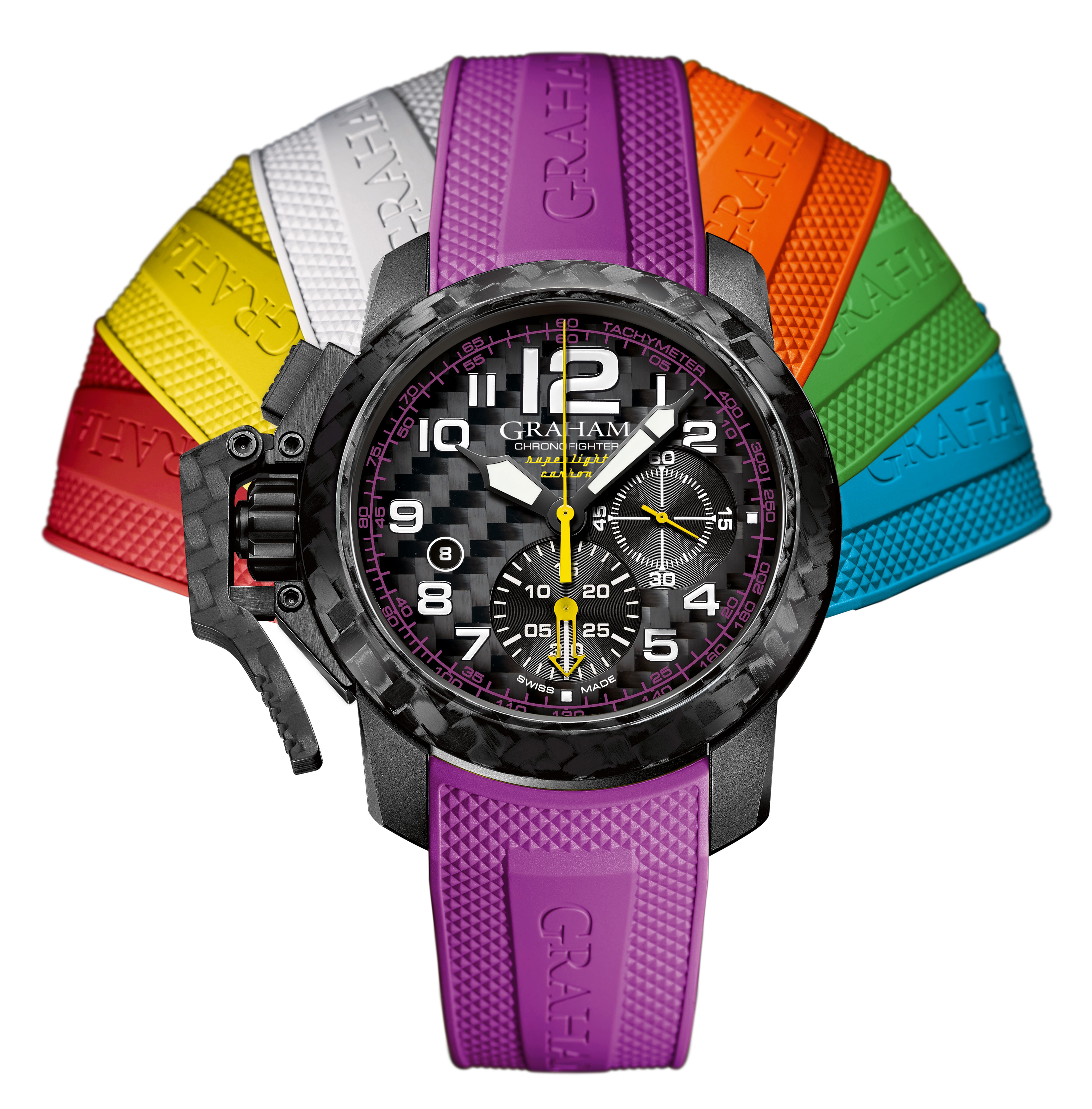 The strong Graham affinity with motor racing is more than skin-deep. Sponsorship of the Brawn GP Formula One team from 2009 to 2011 preceded partnerships with the Swiss Porsche Cup, the Isle of Man Tourist Trophy, the Baja 1000, the GT Asia Series, the Spengler Cup, Silverstone circuit, the Swiss Gurnigel Hill Race and the Club Porsche Romand. 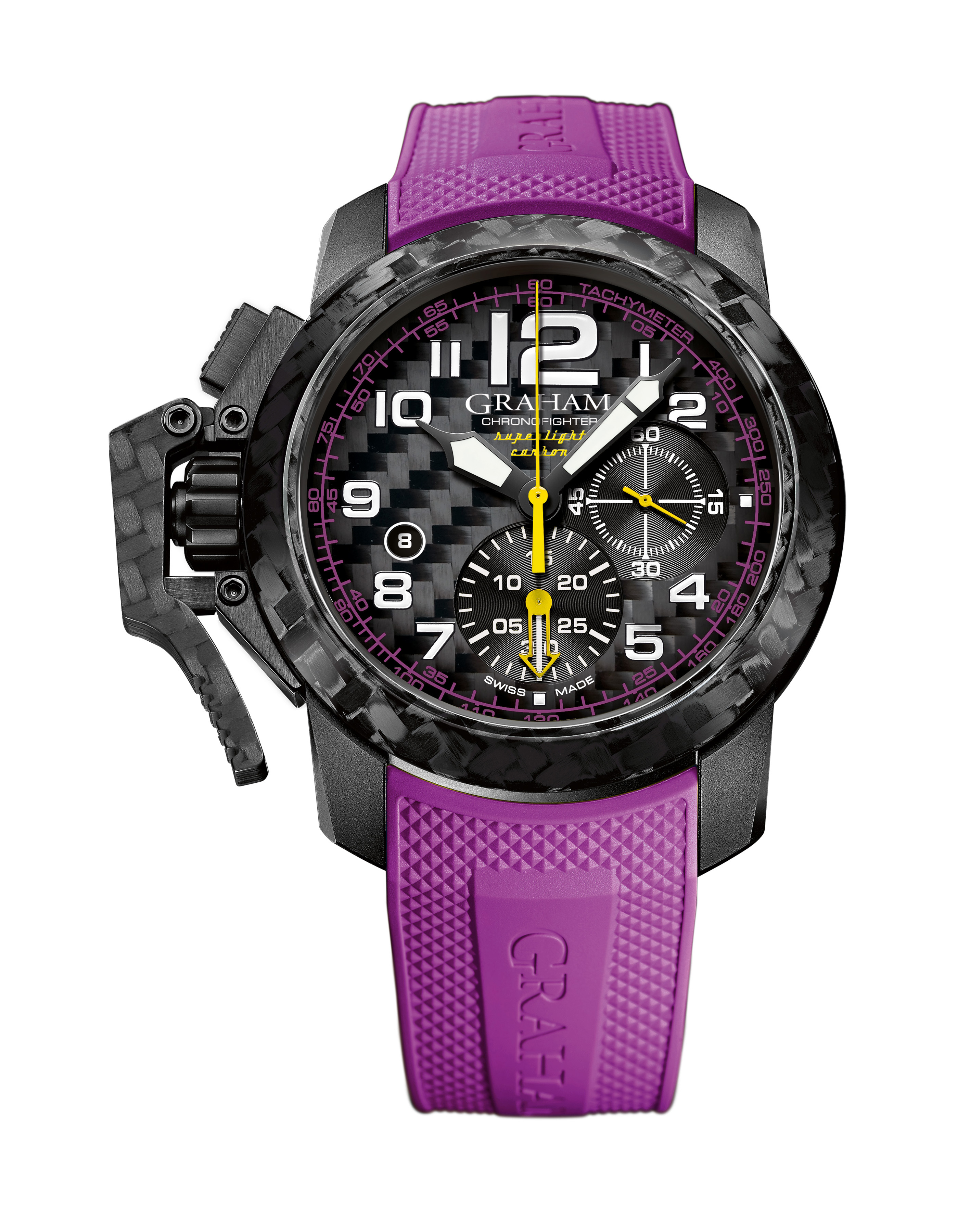 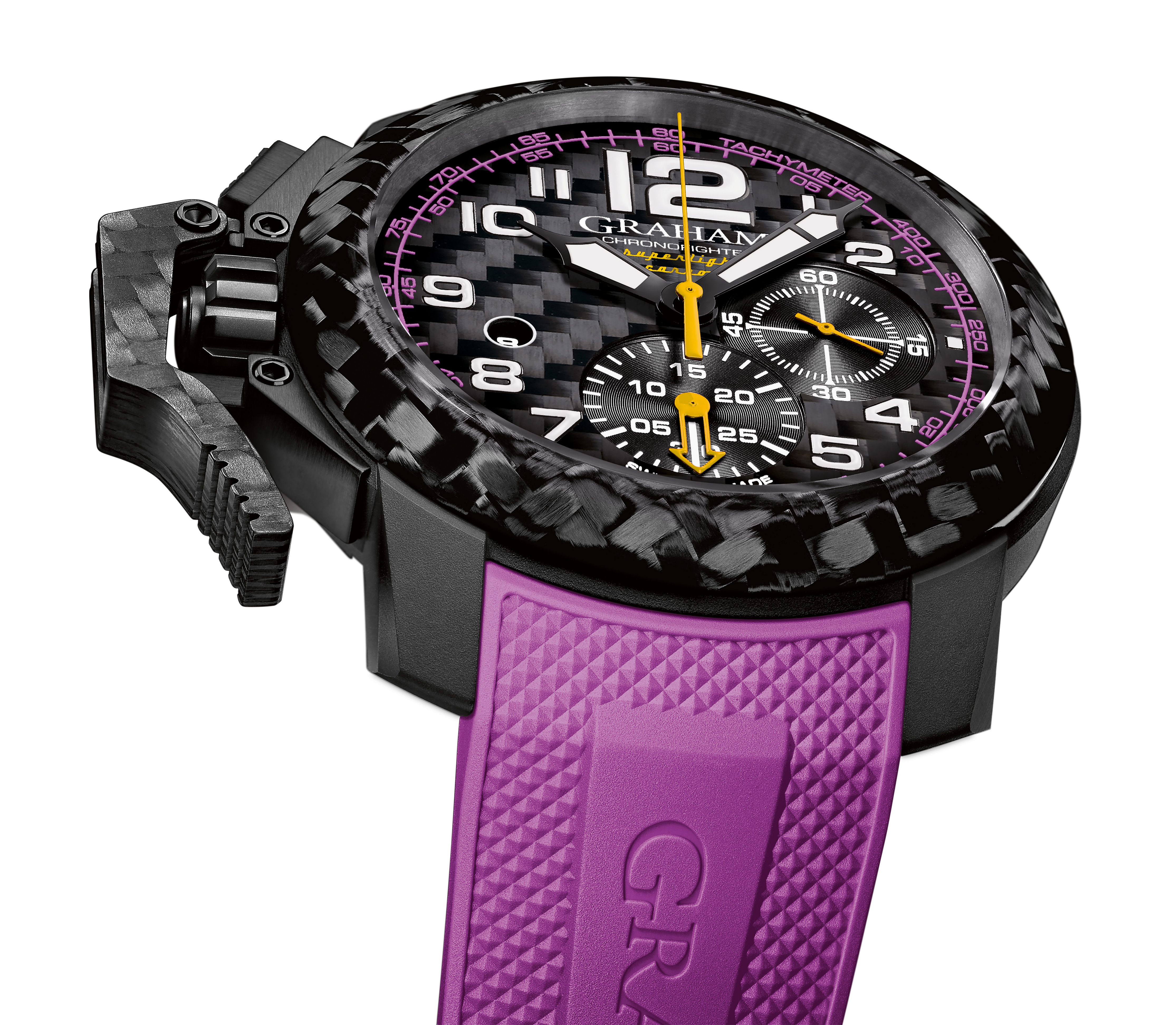 The combination of carbon, a pillar of contemporary racing car prowess, and the head-turning tyre colors, accurately reflect these watches’ intrinsic union of appearance and performance. Unlike tyres, the straps’ functionality is weather-independent so their robust rubber composition is constant. It goes without saying that none of these pieces is for “softies”. Orange conveys anticipation, green action, and purple asserts itself confidently as the new red. With their integrated “Clous de Paris” pattern, these stylish, bold attachments are as out there as a pace car. 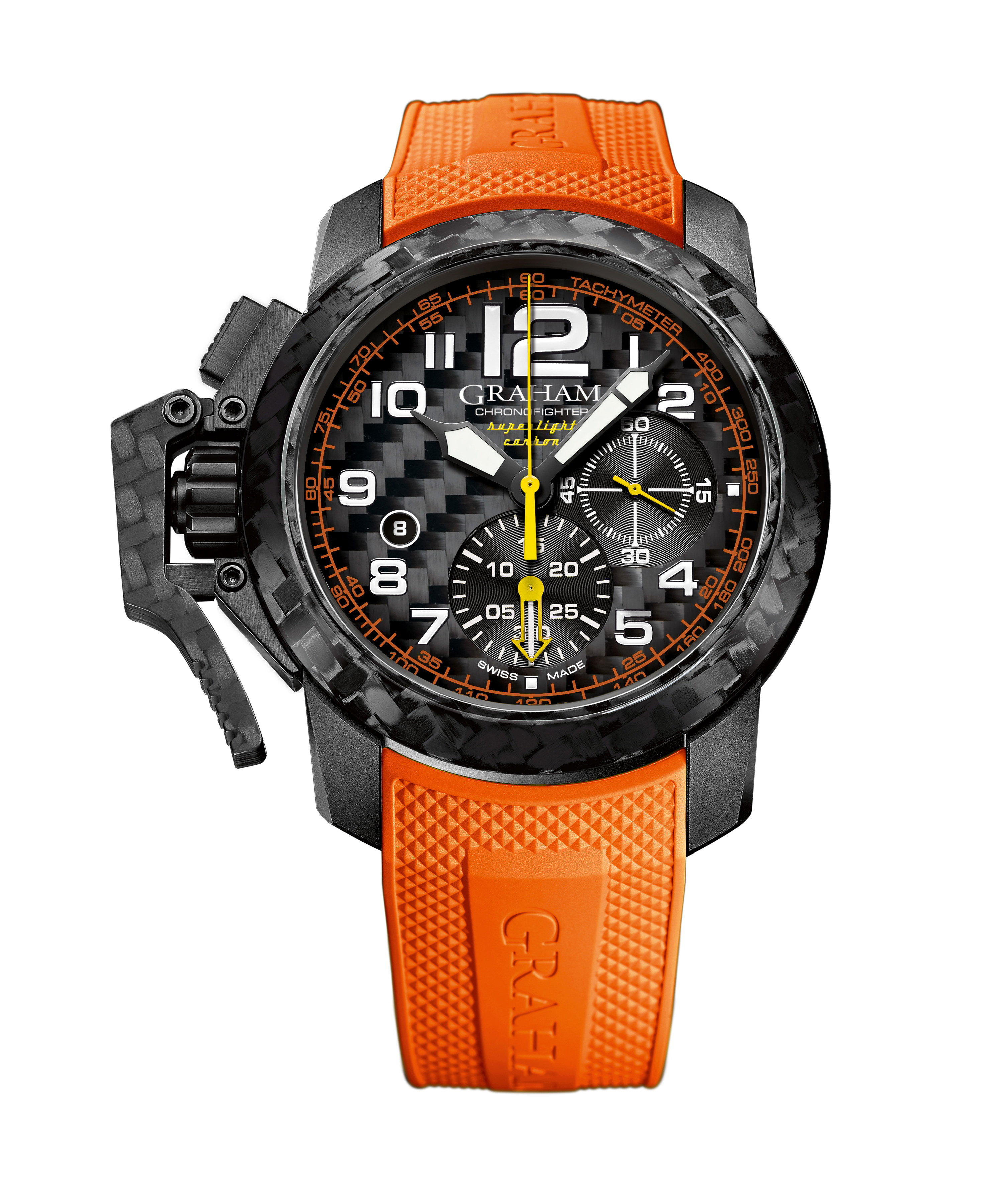 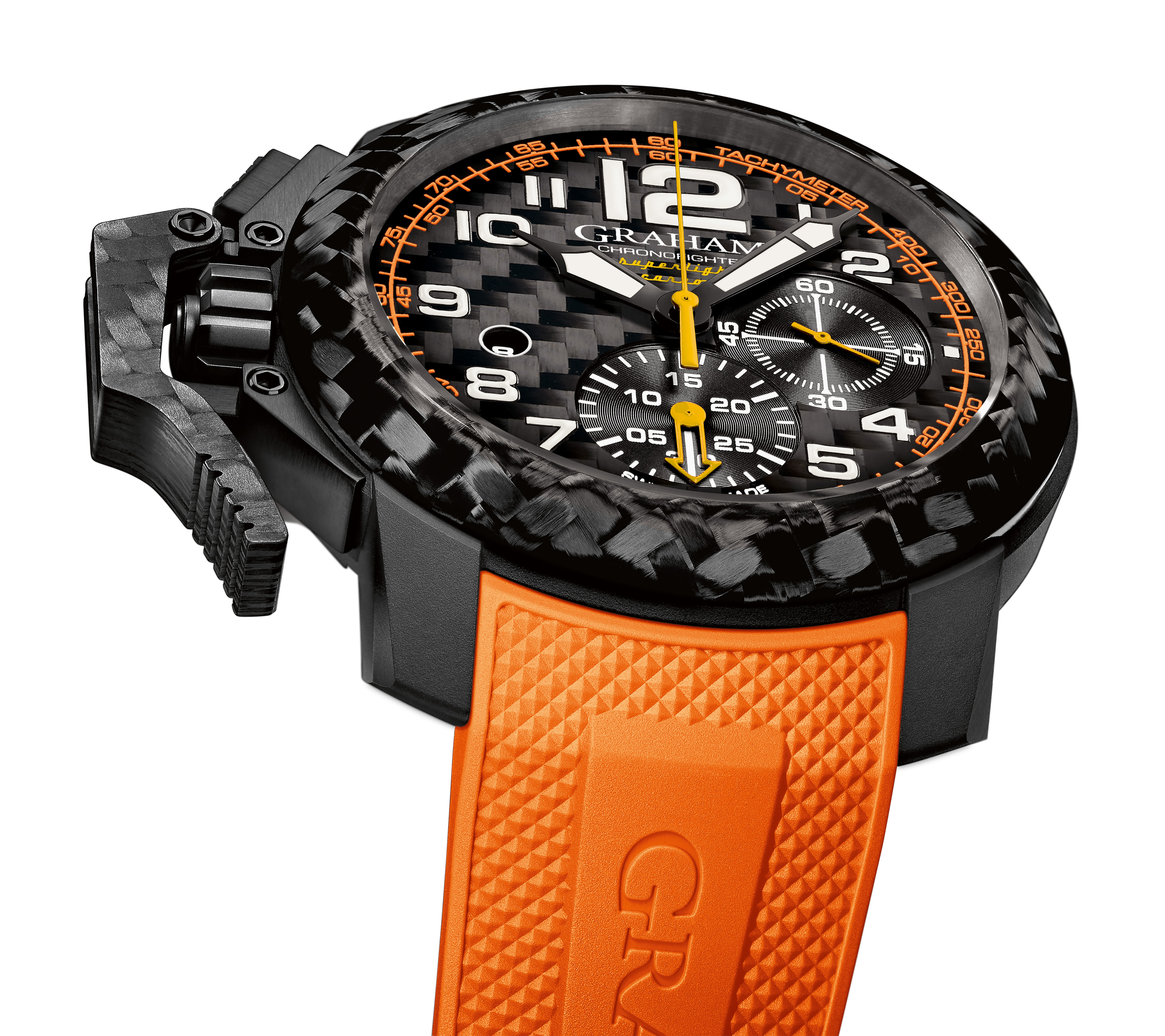 In racing, weight definitely does matter. In the Graham Chronofighter Superlight Carbon it does too. Weighing in at less than 100 grams each, these sporty timepieces are never slow off the grid. The case, trigger, bezel, dial and buckle are made of the innovative superlight carbon that’s become the 21st century hallmark of Formula One car construction. The resultant watches’ lightness could cause them to become forgotten; their distinctive design with the iconic trigger ensures that’s not going to happen. 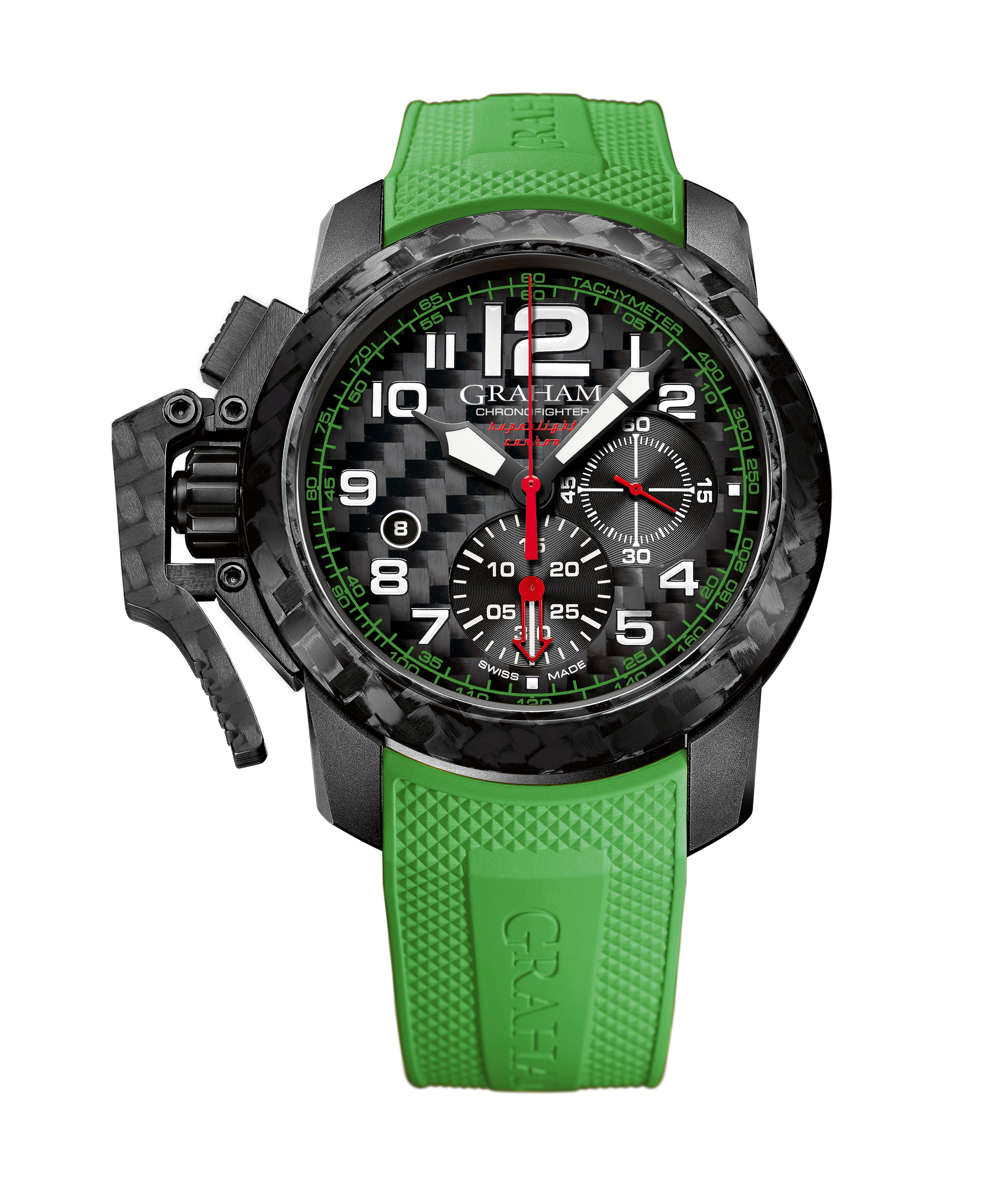 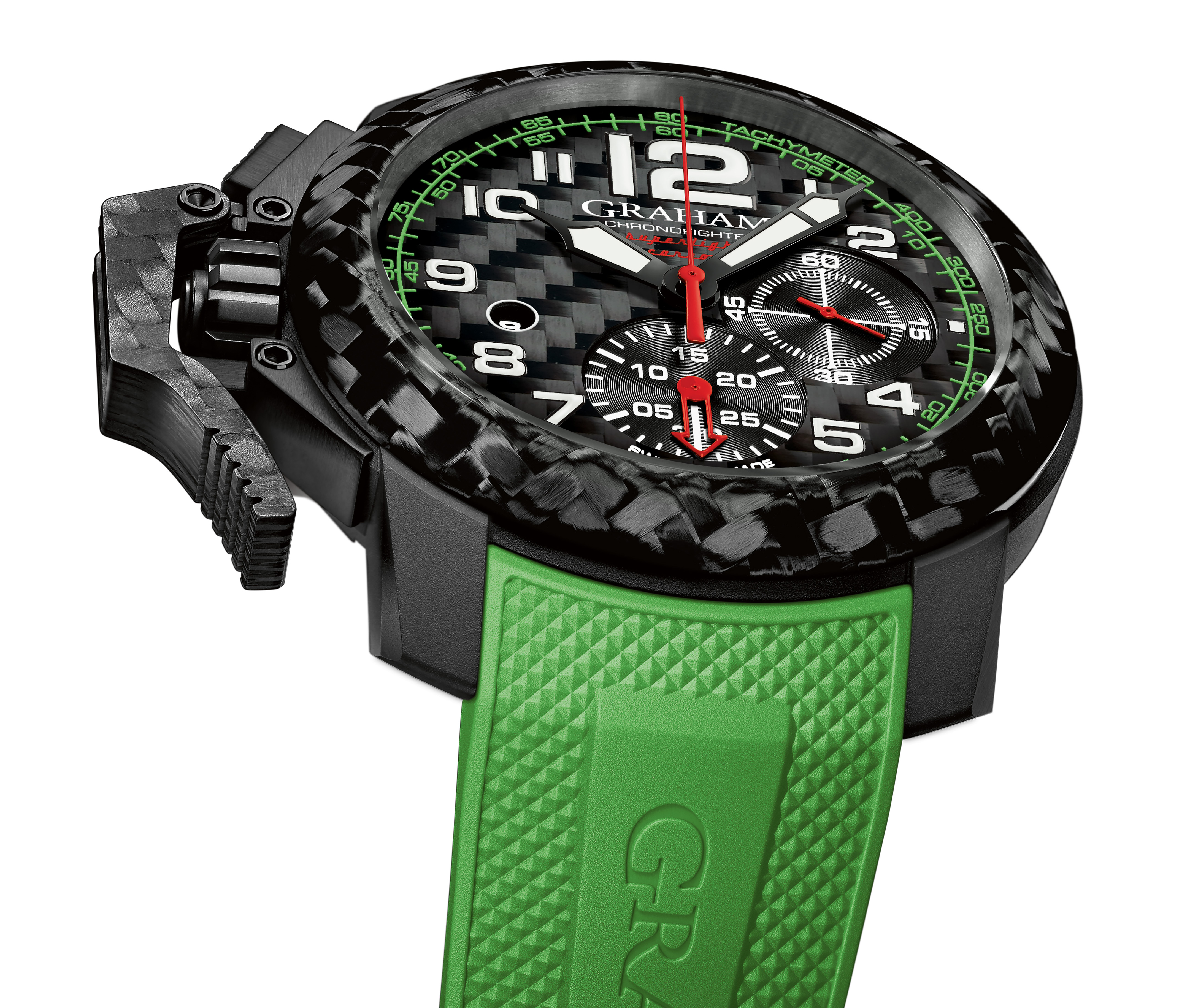 GRAHAM traces its origins to London clockmaker George Graham (1673-1751) who is considered as the father of modern watch making. He is known as the father of the chronograph as he invented the start and stop device of the chronograph, the dead-beat and cylinder escapements, to name a few. He also built the master clock for Greenwich Royal Observatory which timed the majority of the achievements by the 18th century astronomers and sailors and manymeasuring instruments for scientists. GRAHAM SA was created in 1995 and develops outstanding and atypical watches in La Chaux-de-Fonds, Switzerland.