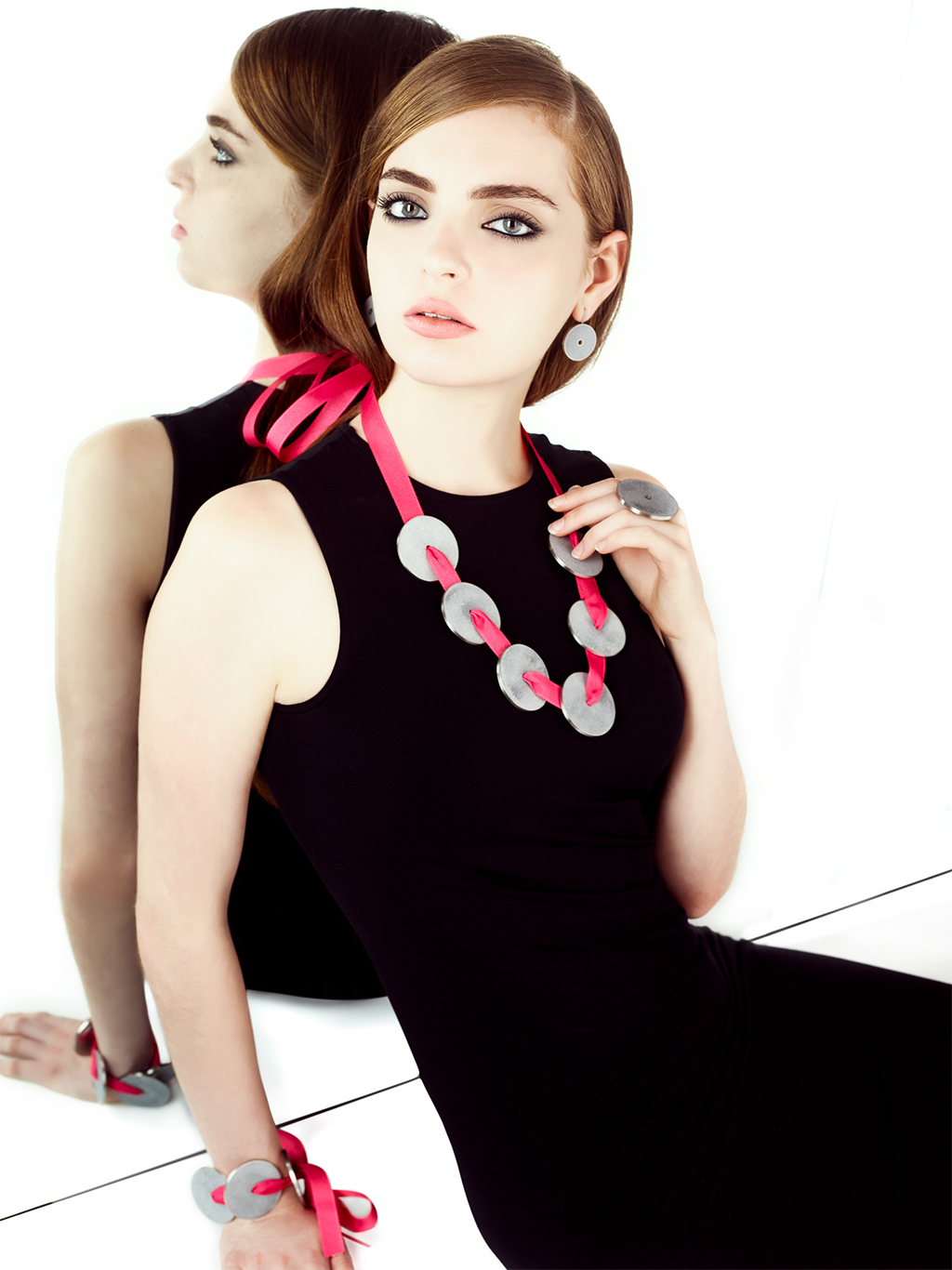 Discus Concrete Necklace
A unique necklace of thin concrete and stainless steel discs woven onto grosgrain ribbon. Is a beautiful addition to the simple black dress. Each concrete piece is cast and finished by hand with a unique surface. No two pieces will be the same.

Karen Konzuk aspires to create jewelry that is more wearable architecture than simple accessory. A graduate of the Nova Scotia College of Art and Design, Karen earned a BFA with a major in Jewelry Design and a minor in Art History, and then introduced the KONZUK line shortly after graduation. Although Karen’s formal education focused heavily on working with traditional precious metals, the designer has always shied away from mainstream expectations. Karen began to experiment with stainless steel shortly after completing her studies. While the unorthodox material inspired her, its use required that she retrain herself since standard jewelry making rarely calls for stainless steel. The properties of this metal call for an understanding of unusual tools and manufacturing methods. Discus Concrete Bracelet
A 75mm disc of concrete and stainless steel is set on a two-toned pairing of grosgrain ribbon. The bracelet adjusts in the back with a stainless steel slide. Will fit any size wrist. The concrete surface is hand finished to reflect the raw beauty of concrete. 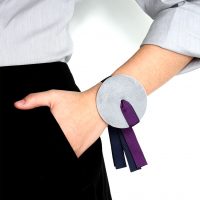 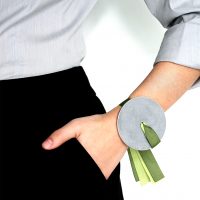 Through trial and error, Karen persevered to create a line that was unlike anything her peers and mentors were creating. Her diligence resulted in a collection of pieces that reflected the designer’s keen interest in industrial design and architecture. Through a studied use of clean lines and an unwavering commitment to a minimalist aesthetic, Karen has evolved KONZUK into an internationally renowned modern line of jewelry for the contemporary man and woman.

Karen draws inspiration from some unlikely places. A trip to the Contemporary Art Museum in Montreal led to the Concrete Collection, with inspiration also coming from St. Mary’s Cathedral in San Francisco. While a visit to Marfa, Texas to view Donald Judd’s works inspired the Vent Collection.

Some of Karen’s notable achievements include select pieces featured at the 2004 RED+WHITE Exhibition at Canada House in London. She has also designed custom pieces for style icon Sir Paul Smith’s flagship stores in Los Angeles and New York.

In September 2009, Karen won top honors in Fashion/Jewelry at Western Living’s Designer of the Year event. Perhaps one of her proudest moments came when Karen was short-listed for the design of the Vancouver 2010 Winter Olympic medals.

The Discus concrete jewelry collection is a line of concrete-and-steel jewelry inspired by the dynamic surface textures of Richard Serra’s sculptures. Discus is based on a series of generously-sized discs; proportioned for rings, bracelets, earrings, and necklaces. The discs are formed by setting concrete into steel. Each piece is then refined by hand in an organic process that creates an unexpected, one-of-a-kind finish. 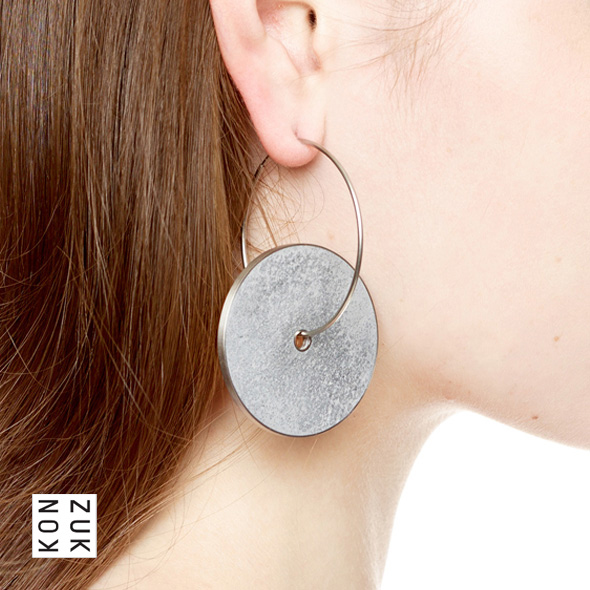 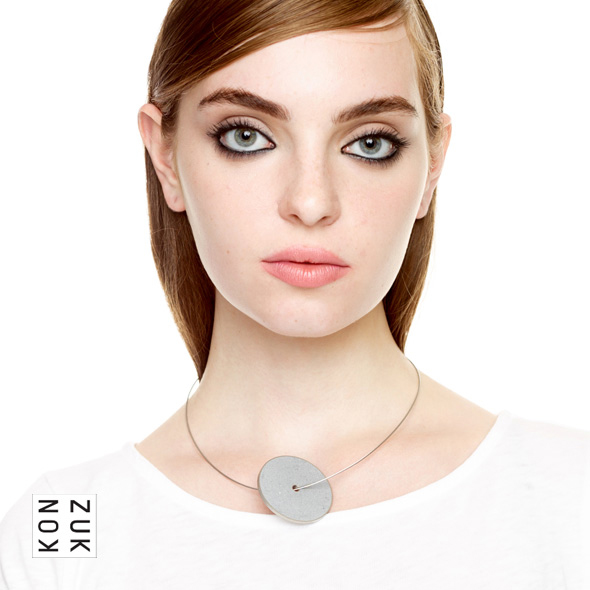 Discus Concrete Necklace
A dynamic necklace of a stainless steel and concrete disc through which the stainless cable is threaded. Sits at and angle so both sides of the piece can be seen. Each necklace will be unique as the concrete is cast and finished by hand to reflect the beauty of the raw material. Discus Concrete Necklace
A beautiful large disc of concrete is set into stainless steel and is strung onto a stainless cable. The 75mm disc sits slightly at an angle for added detail. 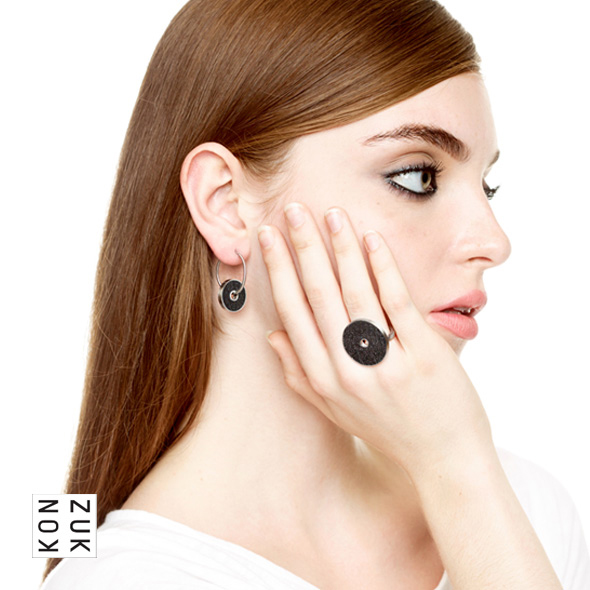 Discus Concrete Earrings
At 15mm in diameter the smaller Discus hoops are so light they can be worn everyday. The black concrete discs are suspended on silver hoops for ease of wear. Each piece is hand finished and unique.

Discus Concrete Ring
The smallest of the three Discus rings, but still looks amazing on any finger. Also is a great pairing with the medium sized ring in the opposite color. The concrete is set into a stainless steel disc and finished by hand. A 2.5mm wide ring is welded to the disc for a comfortable band that can be worn everyday. Discus Concrete Ring (Black)
A beautiful ring of tinted concrete and stainless steel that will stand out in a conversation. The concrete is cast into the stainless steel disc and finished by hand to bring out the unique qualities of concrete. No two ring will be alike.

Discus Concrete Ring (Gray)
A ring unlike anything else. The disc of concrete and stainless steel sits on the top of a 2.5mm stainless band.

The KONZUK, Stellar Collection of concrete-and-diamond jewellery is inspired by iconic 20th century kinetic sculptures and paintings. The Stellar line echoes the architectural principles of balance, rhythm, and harmony to symbolize the delicate art of achieving balance in our busy lives. 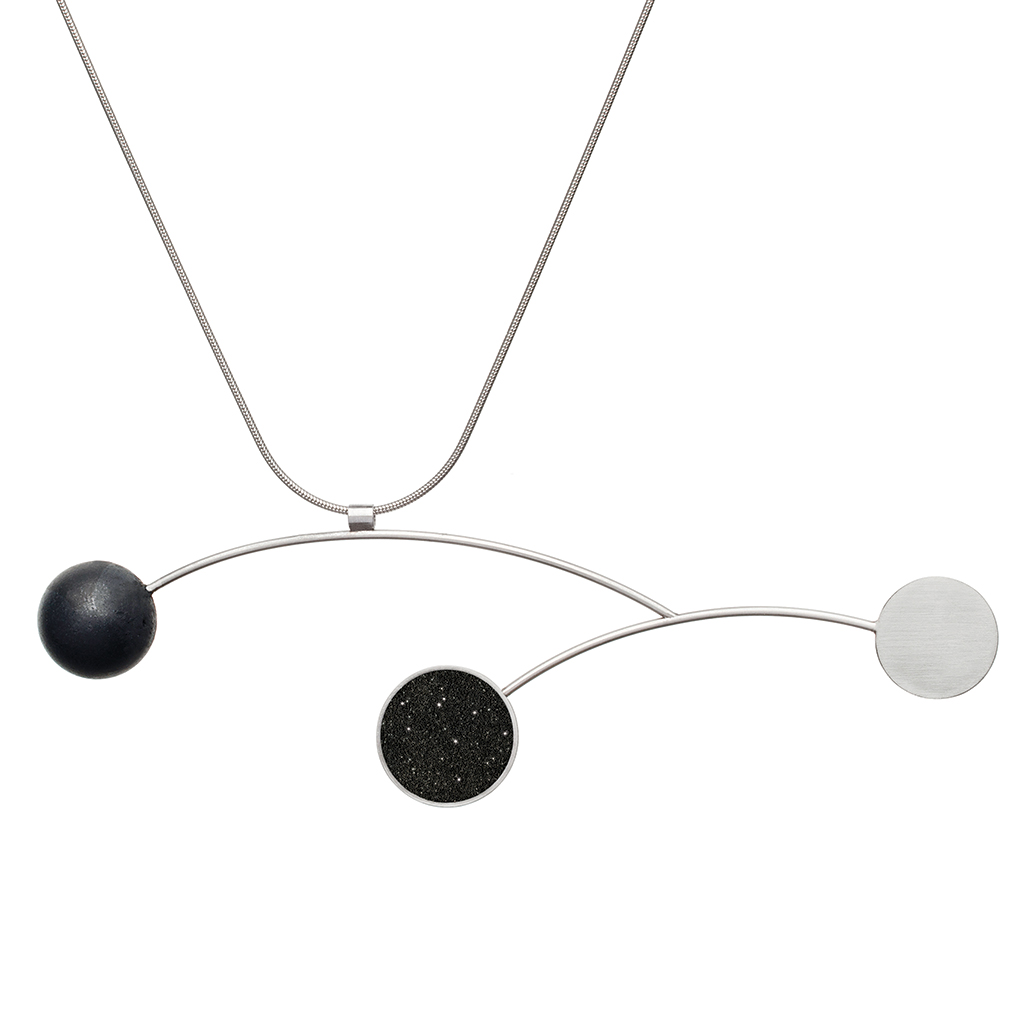 Cassiopeia
Find balance with the beautiful sculptural necklace, Cassiopeia. Cassiopeia is a constellation in the northern sky, named after the vain queen Cassiopeia in Greek mythology, who boasted about her unrivalled beauty. Cassiopeia was the wife of Cepheus, King of Aethiopia and mother of Princess Andromeda. Cepheus and Cassiopeia were placed next to each other among the stars, along with Andromeda. She was placed in the sky as a punishment for her boast that her daughter Andromeda was more beautiful than the Nereids or, alternatively, that she herself was more beautiful than the sea nymphs. As punishment, she was forced to wheel around the North Celestial Pole on her throne, spending half of her time clinging to it so she does not fall off.

Konzuk’s move from the fast-paced city to a remote coastal location provided a new venue for inspiration. Typically influenced by art, design and architecture, designer Karen Konzuk found her attention drawn to the landscape around her. Each piece reminds individuals to find moments of solitude to connect with their thoughts, each other, or their surroundings. Draco
Inspired by mid-century mobiles the Draco necklace is a beautiful statement piece. Draco is a constellation in the far northern sky. It’s name is Latin for “dragon”. Draco is circumpolar (meaning, never setting), and can be seen all year from northern latitudes. In Greco-Roman legend, Draco was a dragon killed by the goddess Minerva and tossed into the sky upon his defeat. The dragon was one of the Gigantes, who battled the Olympic gods for ten years. As Minerva threw the dragon, it became twisted on itself and froze at the cold North Celestial Pole before it could right itself. Sometimes, Draco is represented as the demon son of Gaia, Typhon.

The Stellar designs feature authentic diamond dust embedded in black-tinted concrete. The sparkle of real diamond residue, re-purposed into jewellery, elevates the tastefulness of the minimalist designs. Each piece of jewellery is individually handcrafted in the designer/maker studio, resulting in subtle variations that make each piece unique. Fay
Modern and delicate, the Fay necklace is inspired by iconic mid-century design. Used by John Keats to reference the stars, “the attendants of the moon in the night sky”, in the poem Ode to a Nightingale. Naming of this piece was self-serving. We feel Fay is a great mid-century (design) name.

“The collection is about taking a moment to appreciate things like the stars in the night sky,” says Konzuk. Vesta Major
Pin the night sky above your heart with the elegant Vesta Major brooch. Vesta is one of the largest objects in the asteroid belt and is named after Vesta, the virgin goddess of home and hearth from Roman mythology. Vesta is the second-most-massive body in the asteroid belt after the dwarf planet Ceres. Vesta is the second-largest asteroid, only slightly larger than Pallas, but significantly more massive. It is also the brightest asteroid visible from Earth.

All images courtesy of KONZUK.